Novel coronavirus (CoV), severe acute respiratory syndrome coronavirus 2 (SARS-CoV-2), was first identified in December 2019 in Wuhan with symptoms like dry cough, sore throat, nasal congestion, tiredness, fever, loss of taste, and smell which may change with a mutation in the virus [1-2]. The SARS-CoV-2, SARS-CoV and Middle East respiratory syndrome CoV (MERS-CoV) come under genus Betacorona virus [3]. The pathogen was soon identified as a pandemic across the globe so that based on World Health Organization (WHO) reports 266,504,411 cases were recorded globally on 8 December 2021 [4].

Figure 1 shows a general schematic of SARS-CoV-2 and its structural proteins. The four structural proteins of βcoronavirus are membrane (M), envelope (E), spike (S), and nucleocapsid (N) protein, mediation of coronavirus host infection is established by spike (S) protein. An investigation by scientists in China revealed that the SARS-CoV-2 requires an angiotensin-converting enzyme 2 (ACE2) receptor for their binding and invasion of the host [5-6]. Researchers are trying to find specific treatments for the new virus and several therapeutic agents have been investigated. Theoretical methods such as molecular docking and molecular dynamics not only accelerate the process of discovering a new drug but also reduce research costs. By emerging the crystal structure of the main protease of SARS-CoV-2 in protein data bank [7] many studies calculated binding energy between drug molecules and the main protease of SARS-CoV-2 to evaluate a drug candidate [8-12]. Molecular docking could give a first approximation of molecular interactions when there are several drug molecules and could be done as the first step of computational studies. Further steps give an accurate vision about molecular interactions that could be obtained with MD simulation which is a time-dependent method.

In some studies, the inhibitory of natural substances and phytocompounds against the SARS-Cov-2 have been evaluated [13-14]. Alzami et al., [15] investigated four natural compounds for blocking human ACE2 receptor. Their results showed that Andrographolide and Pterostilbene displayed better inhibition potential for ACE2. The potential of saffron which contains crocin, crocetin, picrocrocin and safranal, for treatment of SARS-CoV-2 was investigated [16-17]. Our previous study demonstrated that crocetin has a high affinity towards the spike protein and main protease of SARS-CoV-2 [18-19]. The molecular docking of withaferin-A derivative molecules exhibited a binding affinity of - 7.84 kcal/mol with the main protease of SARS-CoV-2 [20].

Figure 01: Schematic representation of SARS-CoV-2 and its structural proteins.

Also, the drugs for other diseases such as HIV, Hepatitis and Ebola were investigated on SARS-CoV-2. A molecular docking calculation indicates that anti-hepatitis C virus drugs such as Sofosbuvir, Ribavirin, and Remdesivir have high binding energy towards the main protease of SARS-CoV-2 [21]. Although the SARS-CoV-2 has a 79.6% sequence identity to SARS-CoV [22], it has been shown that SARS-CoV-2 active sites are different from SARS, so the drugs used for SARS such as ribavirin, interferon, Lopinavir -ritonavir and corticosteroids are not necessarily effective for SARS-CoV-2 [23]. WHO reports and clinical studies suggested that Hydroxychloroquine, Lopinavir /ritonavir, Remdesivir and dexamethasone could be a drug candidate for SARS-CoV-2. Investigating the effect of adding functional groups to drugs is a solution that can change the function of the drug A theoretical study shows that when Hydroxychloroquine is functionalized with the hydroxypyrrolidine group, its binding energy with the main protease of SARS-CoV-2 increases from -5.41 to -7.62 kcal/mol [24].

Most theoretical researches use the main protease of SARS-CoV-2 for finding an effective drug [25-26], while a precise look at virus structure (Figure 1) indicates that when drug molecules achieved the virus will encounter spike protein and lipid bilayer as a barrier against drug to enter the virus, so the blocking of the spike protein is a rational way to change the functionality of SARS-CoV-2. Several experimental and clinical trials investigated the effects of different drugs on SARS-CoV-2 including Remdesivir , Favipiravir, Lopinavir and Hydroxychloroquine, but the effectiveness and molecular mechanism of these drugs remain controversial, yet. To find a relation between molecular structure and effectiveness of the drugs on SARS-CoV-2 treatment, the interaction between Remdesivir, Favipiravir, Lopinavir and Hydroxychloroquine (Figure 02) with spike protein of SARS-CoV-2 were simulated by MD simulation in GROMACS software. In addition, the protonation of amine groups of Favipiravir and Hydroxychloroquine and the adsorption of these drug molecules on the spike protein and their effects on protein structure were investigated. Finally, the potential between the changed structure of the spike protein and ACE2 receptor was evaluated by steered molecular dynamics (SMD) simulation to relate binding affinity to potential treatment ability. 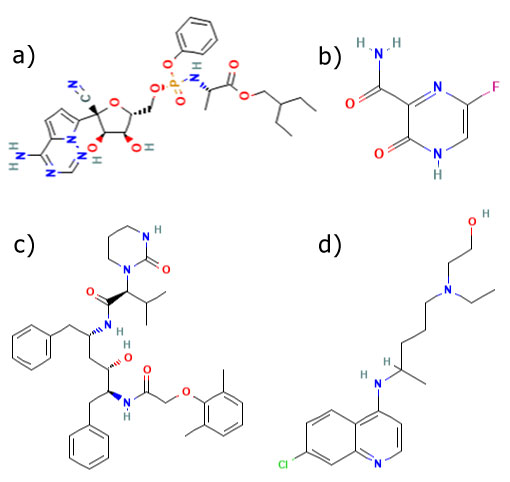 Figure 02:. The chemical structure of a) Remdesivir b) Favipiravir c) Lopinavir and d) Hydroxychloroquine. 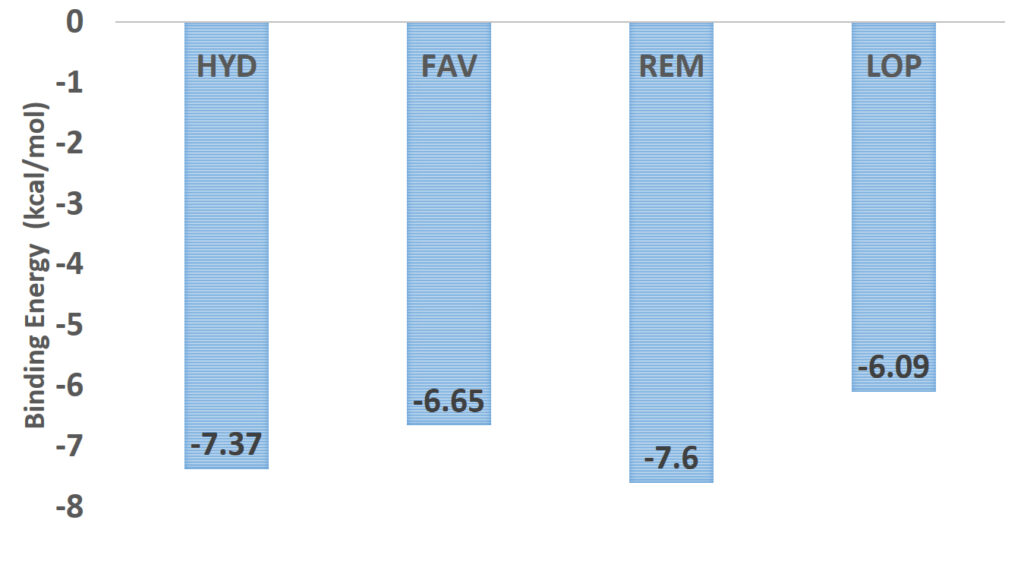 Figure 03: Binding energies between the spike protein and drug molecules. 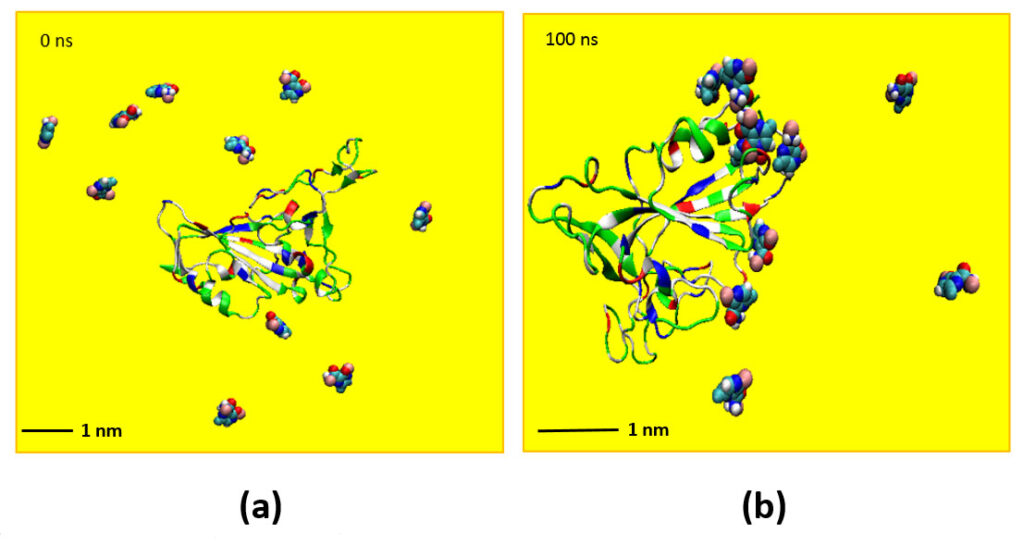 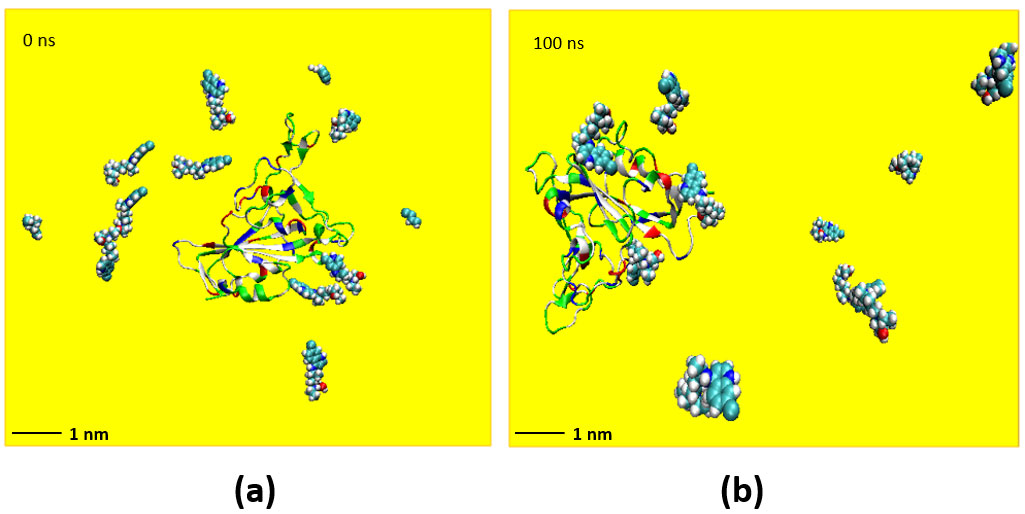 Figure 05: The snapshots of a) initial and b) final step of simulation for interaction spike protein with hydroxychloroquine. The color scheme is the same as Figure 4. See also video S2 in Supporting Information (SI). 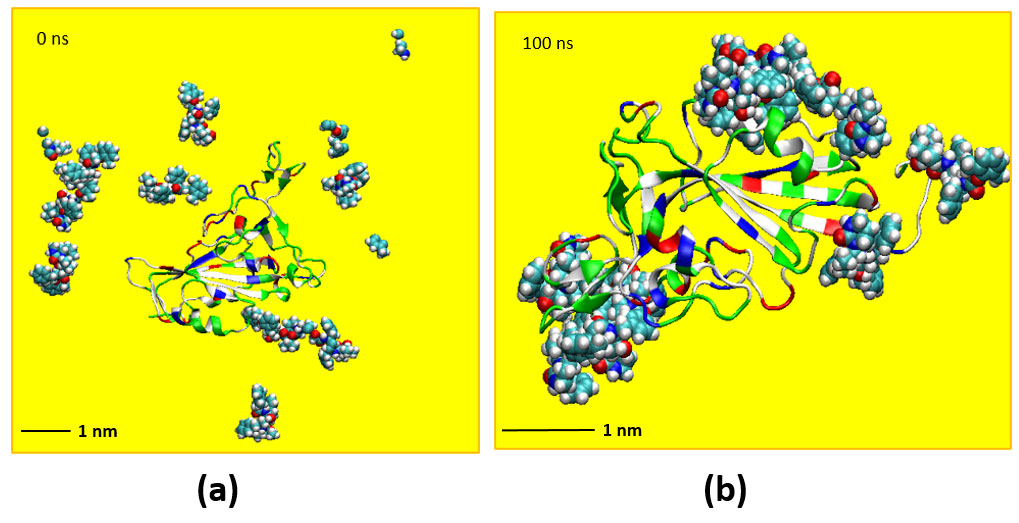 Figure 06: The snapshots of a) initial and b) final step of simulation for interaction spike protein with lopinavir. The color scheme is the same as Figure 4. See also video S3 in Supporting Information (SI). 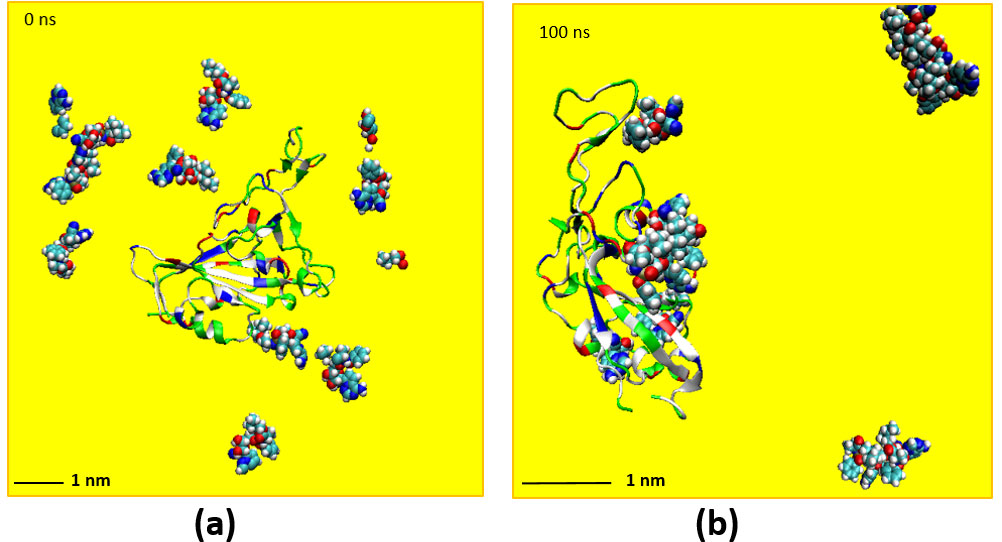 Figure 07: The snapshots of a) initial and b) final step of simulation for interaction spike protein with remdesivir. The color scheme is the same as Figure 4. See also video S4 in Supporting Information (SI). 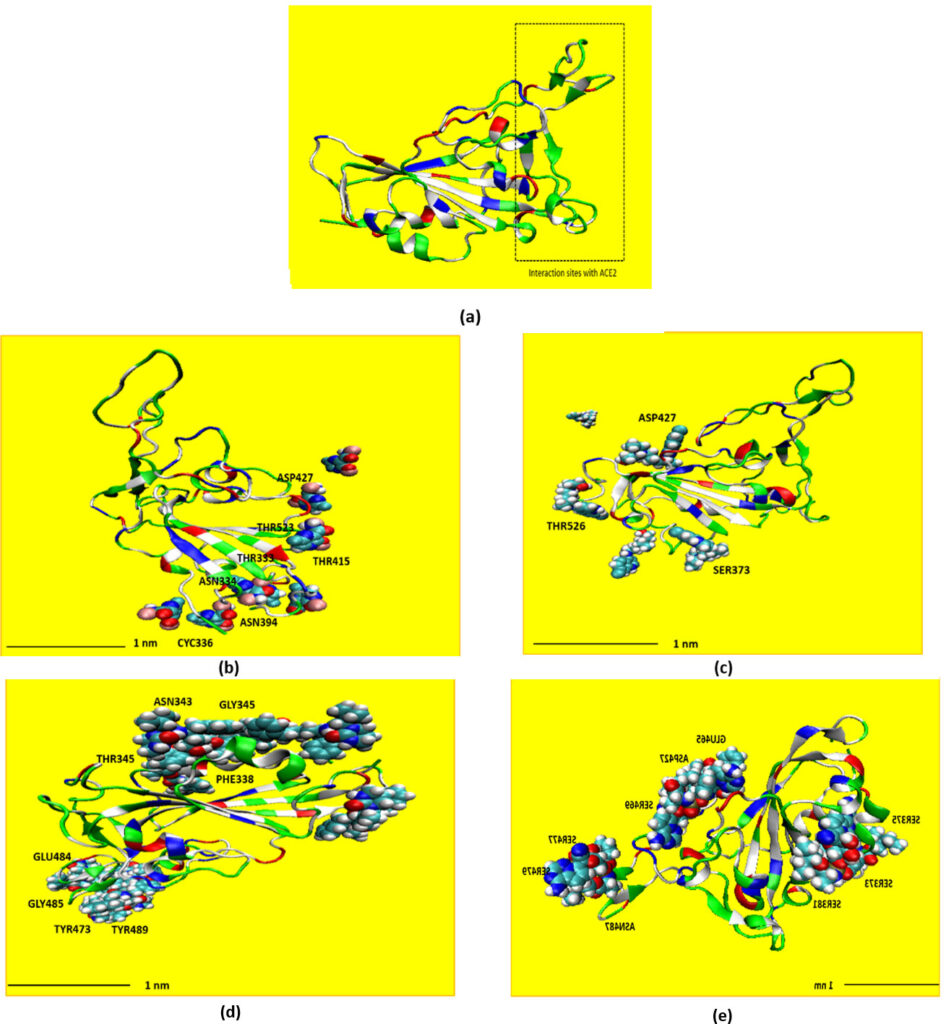 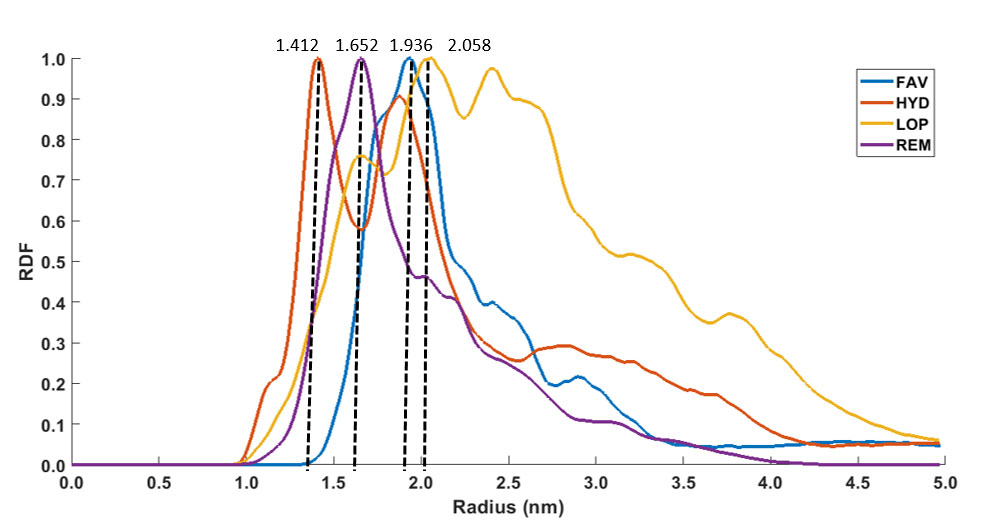 Figure 12: The root mean square deviation of spike protein in water medium and after adsorption of REM, LOP, HYD and FAV.

Table 02: The equilibrium root mean square deviation (RMSD) and radius of gyration (Rg) of the spike protein in water medium and after drug adsorption:

Figure 13: The radius of gyration of spike protein after drug adsorption and in water medium without drug (reference system). 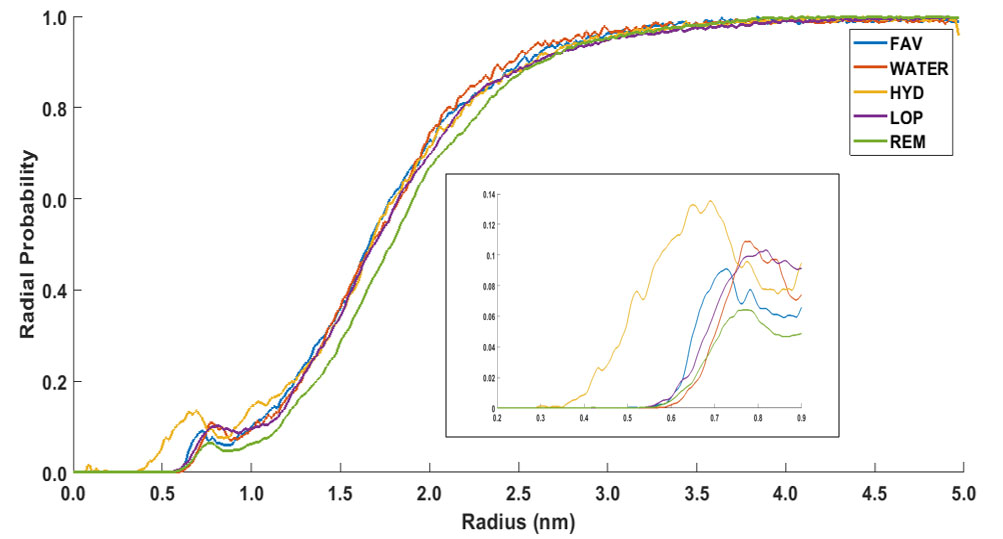 Figure 14: Radial probability of water molecules around the spike protein.

Figure 15: The force-displacement profile of spike protein during binding to ACE2 receptor.

The initial structure of remdesivir, favipiravir, lopinavir and hydroxychloroquine were obtained from DRUGBANK server [31]. The spike protein of SARS-CoV-2 with PDB ID 6M0J was obtained from protein data bank server [7].

The GROMACS 5.1.4 simulation package [33] was employed to perform all simulations. The visual molecular dynamics (VMD 1.9.1) program [34] was used for molecular visualization. The all-atom GROMOS54A7 force field was employed to calculate all bonded and nonbonded interactions [35]. The simple point charge [36] model was selected for water molecules. The surface charges of drug molecules were calculated by MarvinSketch 18.10 software [37]. At pH=7.4 the charge of remdesivir and lopinavir is zero and the charge of hydroxychloroquine and favipiravir is positive 2 and 1, respectively. Topology files of drug molecules were obtained using PRODRG server [38] and the partial charges are to be corrected by performing the corresponding quantum mechanics QM calculations. Quantum mechanics (QM) calculations performed by GAMESS software [39] employing DFT 6-31G(d,p) B3LYP method [40-41], along with monitoring variation of molecular conformation to achieve minimum energy of molecules. The partial charges of the atoms were calculated using electrostatic potential method (ESP) [42] and considering this fact that the molecules are present in water medium.

The simulations were performed in the NPT ensemble. The Nose´-Hoover thermostat was used to keep ensemble temperature at 37 (physiological temperature) [43]. The Parrinello–Rahman barostat [44] with semi-isotropic pressure coupling algorithm [45], maintains the system pressure at 1 bar and also, the LINCS algorithm [46] was used to constrain all bonds. The particle mesh Ewald method was employed for calculation of the long-range electrostatic interaction with a cut off radius of 1.2 nm [47]. The Lennard-Jones potential was used to calculate the van der Waals (vdW) interaction with a cut off radius of 1.2 nm as recommended [48]. To clarify the effect of drug molecules, at first, the spike protein was simulated in water medium without drug molecules which was selected as the reference system. Then, for remdesivir, favipiravir, lopinavir and hydroxychloroquine, 10 drug molecules were added into the previous simulation box for each system.The simulation box dimensions for each system were (). The NVT simulation for 10 ns was performed and temperature was set at natural body temperature. The pressure was adjusted at atmospheric pressure in NPT ensemble for 10 ns. Then the MD step was performed for 100 ns for data collection and last 30 ns were used for analysis.

For investigation of the effects of the protein structure on the binding energy with ACE2 receptor a steered molecular dynamics (SMD) simulation was performed. The spike protein was placed at a distance of 7 nm from the center of mass of ACE2 in a simulation box with dimension of (). The NVT simulation for 10 ns was performed at same condition used for the MD simulation. Then, the constant velocity SMD was performed. In which the spike protein was attached to dummy atoms via a virtual spring and was moved at a constant velocity. The force needed for the displacement of the dummy atoms to an imaginary point had been calculated using the following equations [49]:

Where,  is the potential energy gradient, k is the spring force constant, v is the velocity of pulling which could be supposed to be equal to 0.01  , t is the current time, r is the instantaneous vector position, r0 is the initial vector position of the SMD atom, and n is the vector direction which the dummy atom is pulled.