In relation to antecedent mobile phones, smart-phones revolution increased in the twenty first century, advanced larger, higher resolution display screens came into existence. Most of newer generation smart-phones also incorporated with extra features such as personal management tools, high quality cameras, recording devices and advanced health care applications [1].According to recent news and surveys it was projected that Smartphone shipments to add up to 1.71 billion in 2020 year through worldwide. By 2018, over a third of the population is projected to own a Smartphone an estimated total of around 2.53 billion Smartphone users in the world [2].Working distances also influence the text and viewing angle when viewing printed text material. These also results increase demand on accommodative status of eye and vergence if this prolonged, it leads to eye fatigue symptoms .Eye care professionals need to consider the normal working distance for patients near visual tasks and especially during handling the smart phone device and it’s also important to evaluate the asthenopic symptoms if work time on smart phone extends [3]. Prevalence rate of visual disorders and ocular fatigue symptoms is common in visual display terminal users and optometrist role is more in increasing the awareness on these factors. Most of the users relatively show Smartphone activity when internet or data services are assessable and this facility also increases their usage more than one hour with the visual display devices and this demonstrate the value of adapting to user behavior [4]. Spectral distribution of light also influence the miosis which results in convergence difficulties during reading [5]. Smartphone users are under risk to develop sleep disorders and disturbances, electronic devices of visual display terminals emit blue light which show effect on circadian rhythms or sleep cycle activity and adolescents are at more risk in relation to electronic media usage during sleep and insomnia [6]. However the current paper focus on the effect of convergence insufficiency in the healthy individuals who use smart phone activity more than one hour before going to sleep and how the impact is effecting on the sleeping of the participants.

We collected 100 (52 male and 48 female) participants data with Mean (23.0±2.964) age group as shown in Table 1.The comparison  between Gender and CISS score for post experiment showed no statistical significance (p=0.195).
Table 1:  Participants distribution:

But interestingly, in post experiment significance difference (p < 0.048) found between the age and CISS score among the Smartphone users before going to sleep that can be seen in Table 2 and Figure 1. 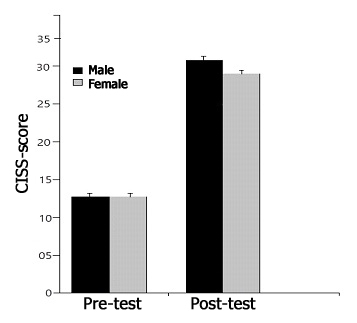 Figure 1: Bar graph showing the association between Gender and CISS score in Pre and post experiment.

The comparison between pre and post exposure with CISS score showed an evident significance (p<0.001) as shown in Table 3 and Figure 2, 3. Similarly, the correlation between the age and CISS score showed weak correlation (r=+0.108) and no statistical significance exists (p = 0.285) for pre experiment.
Table 3:  Wilcoxon Signed Rank test showing the comparison between Pre and Post phone exposure: 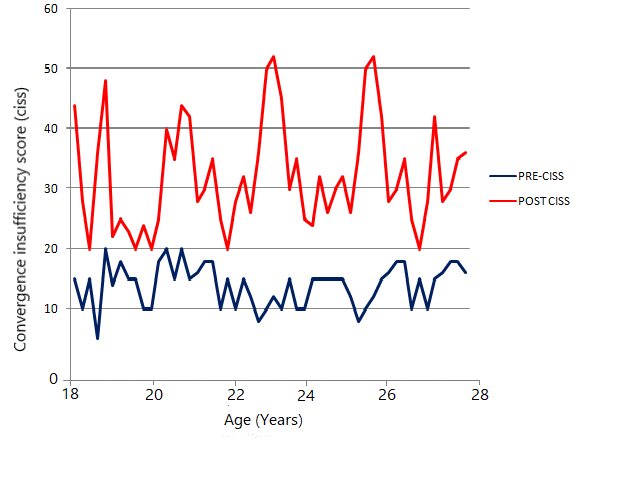 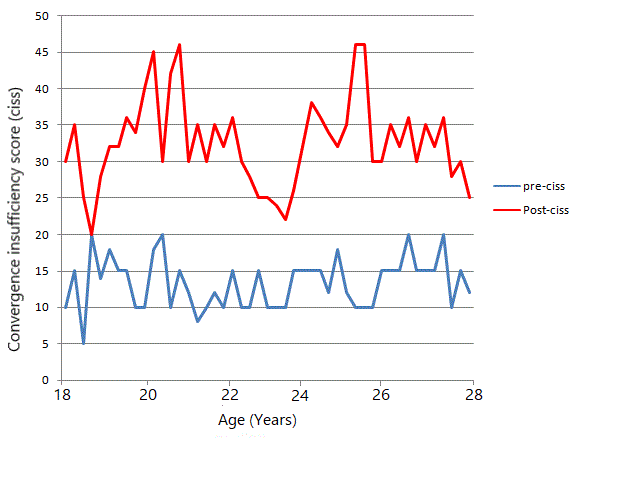 A negative correlation was observed (-0.274) and statistically no significance (p=0.792) found between the age and CISS score in smart phone users before going to sleep, as shown in table 4. Maximum (89%) participants were not aware on usage of applications and features to avoid eye strain, followed by (11%) have awareness among protection apps for smartphone usage before sleep as shown in table 5.
Table 4:  Spearman test showing the co-relation between age and CISS score:

We found few supporting studies on Smartphone usage before going to sleep influences the convergence score, this comparison among the smart phone exposure and CISS score showed significance after post experiment (31.4800±7.69951,P<0.0001) and pre experiment score (13.5700±3.53126) these findings, post-experiment (score = 8.06) than pre-experiment (score = 3.56) (W = 3.5; p<0.001) supported by Long J et.al [7]. However, a weak correlation found between age and CISS score and smart phone prolong activity before sleep and lead to convergence changes by showing eye strain and fatigue, this finding is supported by Park KJ et.al [8].

In our study we also found that maximum participants were not aware on applications and features to avoid eye strain and ocular fatigue while using smart phone at night. Moreover the blue light emitted from the Smartphone also influence on circadian rhythm of sleep, this leads to insomnia and sleep disorders Ji Hye Oh et.al [9]. Constant use without break for near visual task on electronic computers, smart phones eventually leads to decreased blink rate, convergence and accommodative changes which results in eye strain, dry eye and Convergence insufficiency disorders.

It is advisable to prevent prolong working hours and maintaining time break during activity with VDT devices can cause less damage to ocular health Rosenfield M [10]. Not much evidence was obtained from the past literature. So the findings from our study emphasizes that users who use smart phone during night before going to sleep should be avoided and alternative measures should be used. Installing eye protection applications in smart phone and features prevent the brightness and light emitting from display to eye directly will reduce with maximum visual comfort to eye.

This study emphasized that Smartphone activity before going to sleep lead to convergence insufficiency, ocular fatigue and eye strain. The relation between Smartphone usages one hour before going to sleep is associated with CISS score. However a weak correlation observed between age and CISS score in smart phone activity before going to bed. Overall, it should get awared among the smart phone users regarding influence of blue lighting emitted by the displays and prevention strategies like using various eye protection apps can be benefited. As technology emerging the smart phone manufactures should consider the blue light filter inbuilt applications or feature in all smart phones, which gradually decrease the ocular fatigue and visual discomfort in smart phone users.

Participants
This Pilot study was conducted within the age group of 18-29 years .It includes one hundred (52 male and 48 female) participants. This study executed tenure to declaration of Helsinki followed by verbal and written consent from the participants. No monetary award offered to participants in this study. Convenient sampling was done to recruit the participants.
Inclusion criteria

Procedure
This study includes two stages pre and post convergence insufficiency survey (CISS) questionnaire [11].Participants who use smart phone more than one hour before going to sleep were asked to take this survey and questions used were common given by patients for near visual tasks and ocular discomfort after post test .All the participants were instructed and explained about questionnaire and their role in this study .We asked all the hundred participants to take CISS survey before they start using Smartphone at their bedtime and similarly after they discontinue the Smartphone usage,  and going to sleep.

Data Analysis
All the collected data was stored in Microsoft excel and data analyzed by running SPSS statistical software version-29. Shapiro-Wilk test was used to see the normality of the data followed by Mann-Whitney Test was performed to find the relation between pre and post test of Convergence insufficiency score and smart phone usage. Wilcoxon sign rank test was used to find comparision between pre and post experiment. Spearmen’s correlation test performed to see the correlation between the age and CISS score.

Author would like to thank Prof. Bhartendu Shukla, Director of research and training, RJN ophthalmic institute and research center for giving opportunity to conduct this research. Authors thank Ms.Sushma Nandyala, Integrated M.sc (Optometry and vision sciences) student, School of Medical Sciences, University of Hyderabad helping in participants’ data collection. Authors acknowledge the immense help received from the scholars whose articles are cited and included in references of this manuscript. The authors are also grateful to authors / editors / publishers of all those articles, journals and books from where the literature for this article has been reviewed and discussed.