Currently no reliable 1st trimester screening method exists to detect for pregnancies, which will develop preeclampsia. This deficit makes it difficult to develop appropriate intervention strategies. As the underlying placental aetiology leading to the development of preeclampsia is thought to occur early during gestation, we hypothesized that such changes may already be evident in the maternal plasma proteome. Hence, such unique proteomic fingerprints could be used to distinguish between pregnancies with healthy deliveries from those, which developed preeclampsia. For this purpose we investigated the use of Surface-Enhanced Laser Desorption/Ionization Time-of-Flight mass spectrometry (SELDI-TOF-MS) SELDI. Unique spectral profiles were generated using SELDI-TOF-MS. A total of 8 peaks corresponding to peptides and proteins in the range between 3.2 kDa and 22.2 kDa were identified from a set of 26,707 representing the whole spectral analysis (0 to 60 kDa), were identified which could discriminate pregnancies with normal deliveries to those which developed preeclampsia. Maternal plasma proteome fingerprinting by SELDI-TOF MS may lead to the development of a set of markers which can be used in discern pregnancies at risk for preeclampsia.

In the last two decades several biochemical and biophysical traits were identified which led to a considerable improvement in the screening of preeclampsia (PE). But there is no reliable screening biomarker for PE. So there is a need in improve both the sensitivity and specificity of current screening strategies. As considerable efforts has being invested in the discovery and development of further markers. Platforms based on proteomics [1] coupled with mass spectrometry (MS) techniques [2] is gaining considerable acceptance following the identification of different markers associated with several types of disease conditions such as ectopic pregnancies [3], detection chromosomal abnormalities [4–5], ovarian cancer [6–7], diabetic nephropathy [8] and inflammatory bowel disease [9]. Till date only few protein markers are available for the early screening of pregnancy for PE. The current practice of using single protein biomarkers will most likely give way to the use of multiplexed biomarkers, as they promise better sensitivity and specificity [10]. High-throughput platforms using MS permit profiling large numbers of samples in relatively shorter time mostly within the same day of admission. Using proteomics platform to mine deep into the plasma proteome has resulted in the identification of several target candidates for Down’s syndrome [11–12]. Moreover proteomic signatures can reduce problems with individual variability in peak detection [13]. We hypothesized that by using a combination of unique serum proteomic features (hydrophobic proteins) in protein profiles and differentially expressed proteins (hydrophilic proteins) could be employed to distinguish pregnancies at risk of developing preeclampsia from control healthy conditions.

Unique spectral profiles were generated using SELDI-TOF-MS method (Figure1). A total of 8 spectral peaks corresponding to peptides and proteins in the range between 3.2 kDa and 22.2 kDa were identified from a set of 26,707 features representing the whole spectra (0 to 60 kDa) (Table 2). Eight features were identified which could discriminate all control pregnancies from the PE – before onset of PE. We found Galectin1 (P09382) and Plasminogen (P00750) (Table 3) are the protein identified in our pervious study using quantitative proteomics and protein profile found in our current study. Using SELDI platforms we tried to identify unique fingerprints of protein markers for pregnancies at risk for PE. Some studies have previously reported on the use of maternal serum [2, 4] and plasma [11]. The current study addresses these two important issues. Results from our study indicates that it might be possible to effectively screen for pregnancies at risk for PE using 1st trimester maternal plasma samples and generating proteomic fingerprints by SELDI-TOF MS analysis. Protein profiling is a powerful technique to look at several hundred proteins in a single spectrum [14]. 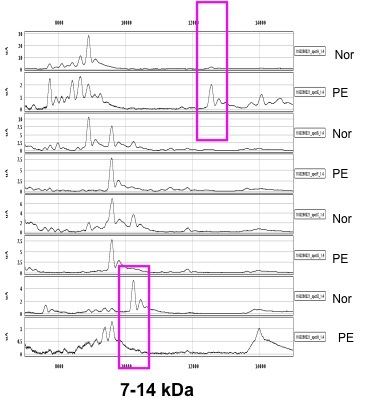 Human serum is known to contain a complex mixture of different kinds of protein and peptides [15], and it is suggested that a success in distinguishing healthy person from a patient could be improved with the identification of unique features in protein profiles [16]. The number of distinct features of spectral information detected in the mass spectrum of a processed sample is a strong indicator of the information content of the signature. Recent studies have focussed on using the power of SELDI techniques to study amniotic fluid, cervical vaginal fluid for various disease conditions associated with the developing fetus such as inflammation, infection [17], and neonatal sepsis and also to investigate into the mechanisms of idiopathic preterm birth [14]. The same approach has been used to detect ectopic pregnancies [3] and as well as Down syndrome [4]. Till now this approach has not been explored for prenatal screening in a large scale as well as in clinical settings.

Table 2: Proteomic features identified to discriminate Pre-eclamptic (PE) conditions from normal are based on protein profiling technique. Y is present and N is absent for peak.

In the current analysis, the mass (mw) of the markers ranged between 3 kDa and 60 kDa with majority of the markers in the range less than 22 kDa. The two proteins Galectine (14 kDa) and Plasminogen (22 kDa) indentified in previous study [18] and also in current study indicate that the method is working for SELDI platform as well. These proteins were over expressed in the plasma of PE cases.  Galectine is a placental derived protein, which comes under the class of glycoprotein. It plays a crucial role in pregnancy by preventing the attack of maternal immune system to the developing embryo. Plasminogen the inactive precursor of plasmin and is present in most tissue, blood, vessel walls and body fluids.

In summary, maternal plasma proteomic profiling with SELDI may prove to be a useful tool for the screening of pregnancies at risk for PE. The accuracy of this approach, however, requires large scale verification before it can be considered for clinical setup for the screening of the pregnancy.

Sample preparation
As described previously, 9 ml blood was drawn into BD P100 tubes (BD Diagnostics, Franklin Lake, NY, USA), which are specially designed for proteomics experiments, in that the EDTA (Ethylenediaminetetra-acetic acid) and protease inhibitor present in the tube prevent coagulation and stabilize the plasma proteome. Following phlebotomy the samples were centrifuged at 3,000x g for 30 minutes at 10ºC, whereby the plasma was separated from the cellular fraction by aid of a mechanical separator, 100µl aliquots were stored at -80ºC until further use.

Bioinformatics approach
We analyzed spectra of 6 control and 6 cases that developed PE. Each spectrum had 26,707 mass spectral components. To reduce non-specific peaks especially in the low mass range, we eliminated the first 5,989 components that all corresponded to masses < 3kDa. We manually inspected the remaining part of the spectra and selected 62 apparent peaks in the spectra with the aim to select few that could be used to classify PE cases and separate them from the control healthy cases. These 62 peaks served to generate initial feature set based on which the individual cases were analyzed.

Classification process and final selection of features
All classification tasks were done in the same fashion, distinguishing between cases which developed PE and those with normal deliveries, based on the Mahalanobis distance between the groups using the Lawrence and Solovyev algorithm [19]. We also searched for the minimum number of features and the small portion of the data in the training set, so as to achieve good generalization properties of the linear discriminate model. The process involved separation of each of the groups to the training part and the test part. The model is built using only the training data, and it is tested using the test data.

Ethics / Institutional review board approval of research
This study was undertaken with the approval of the Institutional Ethical Board of the University Hospital, Basel, Switzerland and written informed consent was required in all instances.

VK & SH has conceived the presented idea. VK has done the sample collection, processing and experiments. NK has performed the computation analysis. IH & OL has provided the clinical support. IH, MC, SH & OL has supervised the findings of this work. All authors discussed the results and contributed to the final manuscript.

We thank Mrs. Vivian Kiefer for her technical assistance and Dr. Andrea for the proof reading of the manuscript.