The wild populations of seahorse wild population is now being threatened by incidental by-catch and the loss of habitats in addition to direct fishing pressure either for the purposes of souvenirs, traditional medicines or aquarium trading activities [1-2]. All seahorse species were listed in the Convention on the International Trade in Endangered Species (CITES) [2]. Due to overexploitation or degradation of their natural habitat, seahorse culture has been proposed as one of the solutions to reduce stress on wild seahorse population [3].

Hippocampus barbouri, commonly known as zebra-snout seahorse, is one of the ten seahorse species found in the Malaysia waters and so far, is restricted to Sabah waters [4]. It has been the focus of several research projects, investigating its feeding, breeding, hormones and phylogeography [2]. The International Union for Conservation of Nature (IUCN) has classified this species as “vulnerable” [5]. Culture of seahorses becomes more difficult than expected due to lack of information on the culture techniques and methods [6].  Most studies in Malaysia were on conservation and distribution [4,7] while studies on aquaculture topics such as culture techniques, growth hormones and physical conditions were limited [6,8,9].  The objectives of this study were to determine the effect of different generations affecting the size of H. barbouri in captivity and to evaluate the effect of inbreeding in the seahorse. 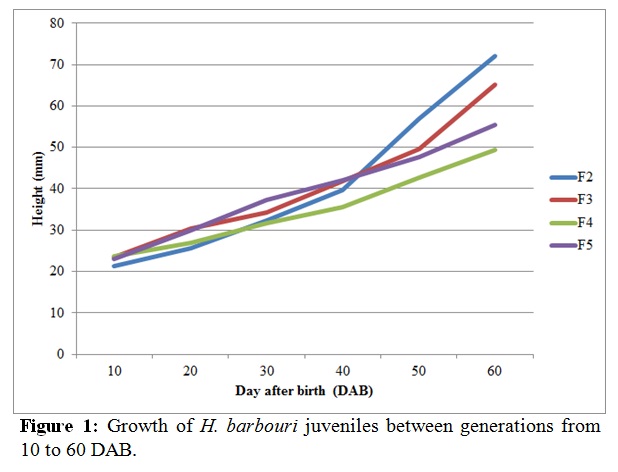 Moav and Wohlfarth [15] reported a 15% decrease in relative to growth rate in the inbred carp (Cyprinus carpio) produced from full-sib parents. Also, there was a lower recapture frequency from inbred families of Atlantic salmon (Salmo salar), in which the lower survival rates were related to inbreeding [16]. In 1971, Aulstad and Kittelsen [11] reported that rainbow trout (Salmo gairdneri) fry has deformities with a breeding coefficient of F=0.25. For current study, all newborn H. barbouri did not show any deformities and number of newborns of H. barbouri did not give any significant differences between generations. The fourth generation (F4), however, produced the least H. barbouri when compare to all other generations.

Mrakovcic and Haley [17] reported that inbreeding at levels of half or full sib mating triggered a decrease in fertility, fry survival to 30 days and fry length at 30 days in zebra fish. However, the survival of H. barbouri in present study showed no significant differences between generations. The survival rates showed an increasing pattern from 54% in F2 to 72% in F5, with an exception of F4.  A study by Su et.al [14] presented that there was a significant inbreeding depression in egg number but not egg size at a relative low level of inbreeding. Poecilia reticulata was found to have a less effective immune system towards disease and significantly higher mean parasite intensity due to inbreeding [18]. On the other hand, a study by Aulstad et.al [12] found no depression due to inbreeding for growth of fry. Horstgen–schwark [13] also reported that there is no difference in growth performance between inbred lines and outbred control (F=0.375) in rainbow trout. As mentioned by Thunken et.al [19], theory predicts that the advantages of mating with close kin can override the effects of inbreeding depression, but it is scarce in the animal kingdom. No evidence for inbreeding depression has been found and it is suggested that in Pelvicachromis taeniatus inbreeding is an advantage. Therefore, inbreeding caused no adverse effect on cichlid fish. These results were aligned with present study, where no negative effect was recorded.

The use of live food resulted in gonad development and better growth of adult seahorses [20]. Quantity and quality of food marked significance on brood size, and this affected sperm quality and gonad development [21-23]. In this study, only live food was used for both the broodstock and seahorse juveniles. However, Melo et.al [24] mentioned that the nutritional value of feed was the main factor affecting growth of seahorse. Adult Artemia were rich in protein but low in carbohydrate and lipids [25]. Craig [26] stated that lipid produced higher energy when compared to carbohydrate and protein. N-3 HUFA is particularly vital for the growth of marine fish. Therefore, the nutritional content of adult Artemia might not be enough for the good growth of seahorse.

Nur et.al [9] mentioned that post larvae of white shrimp (PLS) were most preferred feed and showed best reproductive performance with high numbers of spawning occurrences. Broodstocks of H. barbouri were fed with live Mysis shrimp and adult Artemia. Inconsistency supply of live mysids during monsoon season might affect growth of H. barbouri. At monsoon season, H. barbouri were only fed with adult Artemia, which may affect the reproductive performance of broodstock. Hippocampus barbouri broodstock produced lowest brood size when fed with adult Artemia [9]. Hence, the growth of H. barbouri juveniles between generations was inconsistent.

This study focuses on the growth of domesticated and inbred Zebra-snout seahorses, Hippocampus barbouri. The outcome is expected to aid in the development of seahorse culture in Malaysia.  Breeding and rearing of H. barbouri in captivity is feasible, where growth of this threatened marine species can reach maximum height of more than 70 mm by two months old with the survival rate of nearly 50%.  Although the growth of H. barbouri juveniles between generations was inconsistent, possibly due to feeding, all newborn H. barbouri did not show any deformities and number of newborns did not give any significant differences between generations.  To conclude, inbreeding caused no negative effect on these seahorses. These findings will generate a base for future research on other local seahorse species and help achieving conservation and commercial goals.

Experiment was carried out in Fisheries Research Institute (FRI), Batu Maung, Penang from April 2016 to January 2018. Source of seawater was from Batu Maung, Penang, Malaysia. Serial filtration was done for seawater prior to usage. Seahorses were maintained in glass tank of size 90 cm x 45 cm x 50 cm with moderate aeration. Plastic chain was tied with weight to serve as holdfast for the seahorses. Adults H. barbouri were conditioned prior to breeding. Seahorses were feed on live Mysis shrimp caught from the wild or live adult Artemia. Seahorses were fed twice daily at 0900H and 1600H to ad libitum.
Captive bred newborns of H. barbouri from second generation (F2) to fifth generation (F5) were used in this study.  All newborns were transferred to larval rearing tank of size 90 cm x 45 cm x 50 cm once the juveniles were released from the broodpouch of the pregnant male broodstock. Seahorse juveniles were fed with newly hatch Artemia nauplii for first 10 days after birth. Then, H. barbouri juveniles were weaned over to enriched Artemia. Starting from 20 Day After Birth (DAB), H. barbouri juveniles were fed with live adult Artemia fed with Rotifer or rice flour. From day 40 onwards, live mysis shrimps were introduced to the seahorses as their diet.  All H. barbouri juveniles were fed to satiation twice daily at 0900H and 1600H.
The growth of H. barbouri juveniles was measured at 10 days interval, up to 60 days. Height was taken based on Lourie et.al [27], which is from the top of the coronet to the tip of the straightened tail. After 60 days, the experiment was stopped and all survivors were counted. Five batches of each generation were used for data analysis.  The data analysis was performed by software SPSS 21.0, using one way of Analysis of Variance (ANOVA). Tukey test was used to determine the significant difference between treatments. Results of the growth were given as mean ± standard deviation.

MSI designed the study. MSI and VWCR executed the work and analyzed the data. MSI, VWCR and CKY wrote the manuscript. All authors have read and approved the final manuscript.
Acknowledgement: The authors would like to acknowledge the assistance of Mr. Muhammad Fadzil Harun from FRI Batu Maung.