Cadmium (Cd) is a toxic heavy metal that accumulates for long time in different parts of the human body due to its long half-life (15-20 years) and poor excretion.  Cd occurs naturally and its level in the environment is elevated via anthropogenic activities. Natural sources of Cd can result from volcanic eruptions and forest fires. Cd and its compounds are economically valuable and are used in the manufacturing of NiCd batteries which has dominated the market due to their use in power tools, household appliances and other communication devices. Furthermore, it is also used in manufacturing of paints, plastics, and phosphate fertilizers [1]. One of the main anthropogenic sources of Cd is airborne from smelters, iron and steel production facilities and burning of coal, oil, and municipal waste [2]. There are three routes of exposure to Cd: inhalation of polluted air, ingestion of contaminated food and water, and dermal exposure from lack of unprotected coverage at work.  Of these routes, ingestion through certain foods grown on contaminated soil, and inhalation of cigarette smoking are the major ways of Cd exposure to humans [3-4].
The increasing potential of Cd toxicity has become a global concern. Cd is present in many items in every house and causes irreversible damage to body organs even at low concentration (1-3 μg). It has been classified by the IARC (International Agency for Research and Cancer) as a human carcinogen which causes tumors of the liver, prostate, lung, and other tissues [5]. The major proposed mechanisms by which Cd causes toxicity are: inhibition of DNA damage repair, aberrant gene expression, apoptosis, and the induction of oxidative stress [6-9].

As our team continuous studies to investigate various ameliorative compounds against Cd toxicity, we tested milk thistle seed (MTS) extract in this report. MT (Silybum marianum) is a plant that belongs to Asteraceae/Compositae family. The seeds of MT (MTS) have been used to treat liver and gallbladder disorders [17]. It is one of the most commonly used non-traditional medicines in Germany [18]. MTS powder is commonly used as a dietary supplement in USA for liver detoxification. Given its protective effects on liver and knowing that Cd accumulate mostly in the liver, we hypothesized that MTS extract may play an important role against Cd induced toxicity. In the current study, we evaluated the inhibitory effect of MTS extract on Cd-induced DNA damage through alkaline and neutral comet assays which detect single strand and double strand breaks in CdCl2 treated rat liver cells.

Cd accumulates mostly in the liver due to its role in metal homeostasis and detoxification via the first bypass.  It was evidenced by the analyses of mammalian organs showing more Cd accumulation in liver and kidney than in other parts of the body [19-20].  The liver injury was characterized by the increased serum levels of hepatic transaminases and massive necrosis of hepatocytes [21]. It is reported that environmental Cd exposure is associated with hepatic necro-inflammation in both men and women with increased risk of liver disease mortality [22]. In the present study, we treated the cells with 50, 75 and 100 µM CdCl2 based on our previous report [8]. The Milk thistle seed (MTS) extract is commonly used as liver protective agent in US. In this study, the inhibitory effects of MTS extract on cell death and DNA damage through viability and comet assays were evaluated in CdCl2 treated rat liver cells.

The viability data showed that CdCl2 caused significant (p<0.05) dose-dependent decrease in viability of liver cells in comparison to untreated control cells (Fig. 1). This data was supported by our previous report where it was shown that CdCl2 caused dose-dependent decrease in viability of same liver cell line [8]. However, more toxicity was observed in the current study due to different factors. One of the factors may be the passage number of liver cells used in the experiments. The MTS extract showed significant (p<0.05) maximum protection against Cd-induced toxicity at 5 μg/ml concentration (Fig. 1, lane 5).  Hence, we used this MTS concentration for further studies in liver cells. 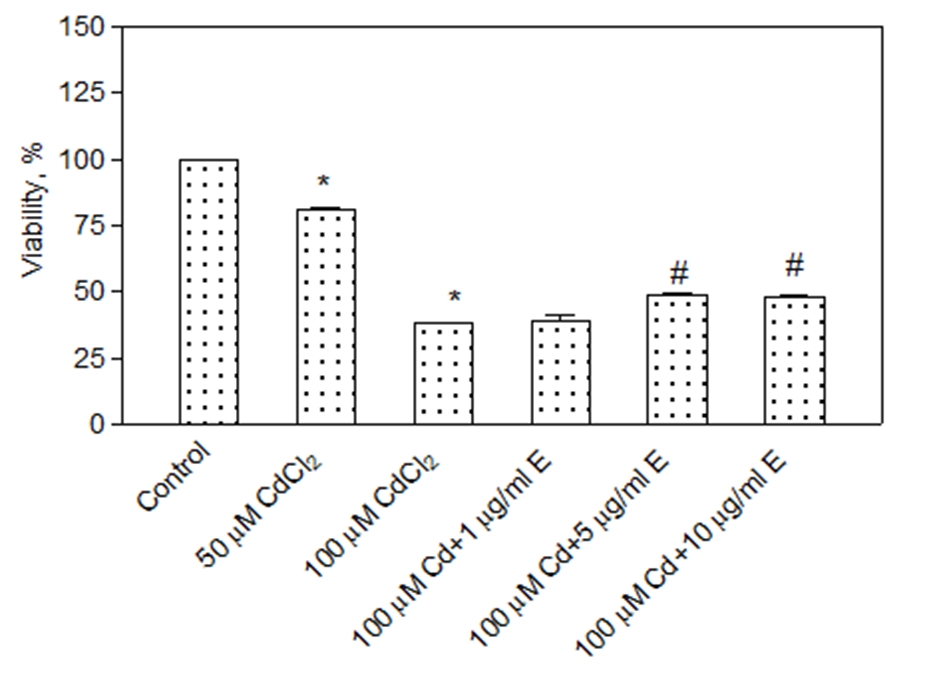 The inhibitory effect of MTS extract on DNA damage in CdCl2 treated normal rat liver cells was evaluated by alkaline and neutral comet assays. The control cells of alkaline comet assay showed round DNA without any comet tail (Fig. 2a). In the cells treated with 50 and 100 µM CdCl2 alone, the comet tail was observed with dose dependent increase in length (Fig. 2b-c). However, in co-treated cells with MTS extract, the comet tail was decreased in comparison to CdCl2 alone treated cells (Fig. 2d). 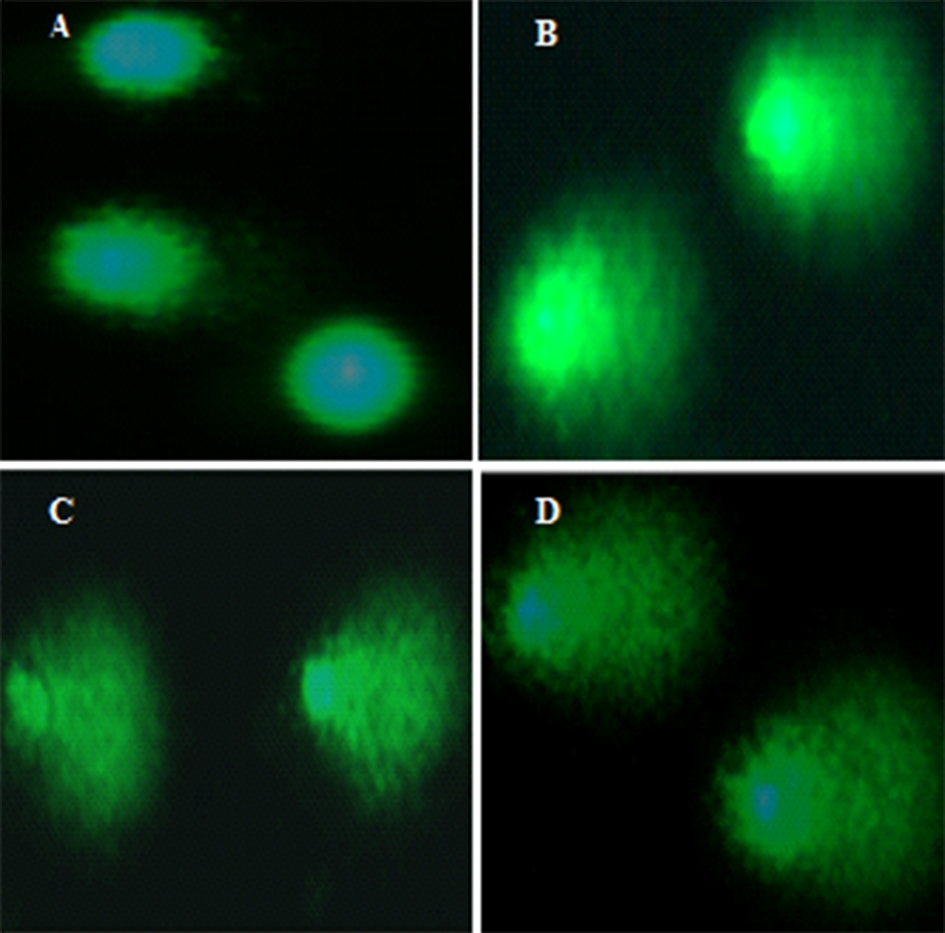 Figure 2:  Comet images of alkaline gel electrophoresis assay showing single strand DNA breaks in normal rat liver cells treated with CdCl2 alone or co-treated with MTS extract. Control (A), 50 μM CdCl2 (B), 100 μM CdCl2 (C), and 100 μM CdCl2 + 5 μg/ml MTS extract (D).
The % DNA in the tail is the ratio of total intensity of the tail and total intensity of the comet (head and tail together).

The control cells of neutral gel comet assay showed round DNA without any damage (Fig. 4a). In the cells treated with 50 and 100 µM CdCl2, the comet tail was observed with dose-dependent increase in length (Fig. 4b-c). However, in co-treated cells with 5 μg/ml MTS extract, the comet length was decreased (Fig. 4d) in comparison to CdCl2 alone treated cells. 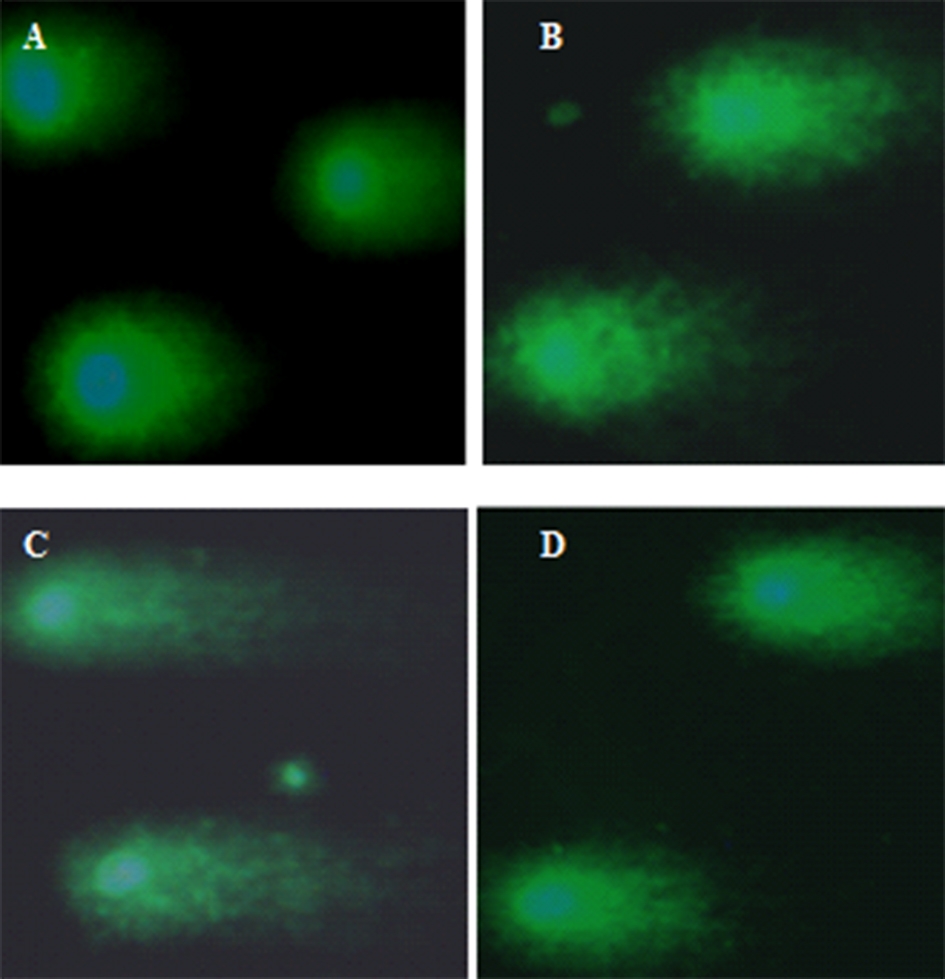 The alkaline comet assay showed the single-strand breaks (SSB); while neutral comet assay showed the double-strand breaks (DSB). The level of DNA damage of Cd-treated liver cells is dose dependent (Figs. 2-5).  This may be due to the liver cells becoming more sensitive to Cd due to increased oxidative stress and the production of lipoxygenase which destroys the liver cells [23]. It was noticed that the level of DNA damage was higher in single-strand breaks than double strand breaks (Figs. 2-5).  This may be  because the reaction sites on the single stranded DNA are more accessible by the damaging agents (CdCl2), hence inducing more damage; while the tightly bound proteins on double stranded DNA may inhibit the accessibility by the damaging agents [24]. MTS extract co-treatment significantly increased the viability of Cd treated liver cells (Fig. 1). The MTS extract contains polyphenolic antioxidant flavonoid complex containing several types of flavonoids [25]. The main active ingredient in MTS extract is silymarin. In previous reports, it was shown that silymarin acts on the outer cell membrane and prevent hepatotoxic substances from entering the cell [26-27]. It was also reported that silymarin inhibits lipoxygenase, an enzyme that destroys liver cells [28] and increases the levels of glutathione, a potent antioxidant [25]. Due to the protective nature of silymarin in MTS extract, less Cd might has entered the cells co-treated with MTS extract which was reflected in increase cell viability compared to CdCl2 alone treated cells (Fig. 1, lanes 3-6).  The alkaline and neutral comet assays data also showed that the co-treatment of cells with 5 µg/ml of MTS extract and 100 µM CdCl2 showed a decrease in DNA damage (Figs. 2-5). The decrease in DNA damage in the co-treatment group may be due to the chelation of Cd or free radicals by MTS extract leading to less availability of free Cd or free radicals inside the cell that cause directly or indirectly the DNA damage.

CAMW, COO, VLDB and LML conceived the idea, performed the experiments, interpreted the data and wrote the manuscript.