Medicinal plants are possible effective antimicrobial agents. Plant products exhibit molecular complexity, stereo chemical abundance and diversity in the ring system amongst other properties. This particularity of plants renders microorganisms unable to develop resistance to the multiple chemical complexes plant compounds can present [1]. Hence, plant products can be of interest in the fight against infectious diseases, drug resistance and also in the discovery of new molecules. For this reason, during the past years, there has been regain interest regarding medicinal plant extracts for the development of alternative drugs to inhibit, prevent or delay the growth of pathogens  [2]. Several studies have been screened plant extracts for antimicrobial activities highlighting plant compounds with promising potential [3-6]. These compounds showed interesting activity against  bacteria (Gram-positive, Gram-negative), viruses, fungi and parasites by affecting several key events in the pathogenic process of these microorganisms [7-12].

In Gabon, plant based traditional medicine is important in the health care of the population. It is therefore essential to gather scientific information about plants that are used to treat infections in order to validate their use [13]. Thus, Macaranga monandra (Euphorbiaceae) is a shrub (or a tree) reaching 25m in height which is used to treat many ailments in Gabon. The barks are taken as a galactagogue, for the treatment of infertility, dyspnea and in case of threatened abortion. The barks are also taken to alleviate HIV symptoms. The geographical distribution covers many countries including Angola, Cameroon, Nigeria, Equatorial Guinea and Central African Republic [13]. Around 300 species have been described in the genus Macaranga [14]. Phytochemical composition of M. monandra is scarce in the literature, however, the composition of other species of the genus reported the presence of phenols, sterols, diterpenes, tannins, alkaloids and flavonoids [15-23]. Besides, a bio-guided fractionation assay highlighted two clerodane-type diterpenes which exerted an antifungal effect against various plant fungi such as Colletotrichum acutatum, C. fragariae,  Fusarium oxysporum, Phomopsis obscurans and P.viticola [24]. The objective of the present study was to screen for potential antimicrobial activities of M. monandra extracts against several pathogenic bacteria and fungi.

The results showed the antibacterial and antifungal activities of methanolic and aqueous plant extracts at different concentrations using well diffusion assay. The extractions yielded 6.24% for the aqueous extract and 5.05% for the methanol one. Table 1 describes the effect of the extracts tested on various bacterial strains. Both M. monandra aqueous and methanolic extracts at 150 mg/mL and 75 mg/mL inhibited the growth of all the strains with diameter of inhibition ranging from 6 mm to more than 16 mm. The Gram-positive bacteria (S. aureus, B. cereus, E. faecalis and S. pneumoniae) were sensitive to the extracts especially S. aureus which showed activity from 50 mg/ml (12 mm<diameter of inhibition<15 mm). All Gram-negative bacteria showed weak activity with diameter of inhibition ranging between 6 mm and 11 mm  even at the highest concentration except for P. aeruginosa which showed diameter of inhibition between  12 mm and 15 mm at 75 mg/ml and 150 mg/ml. 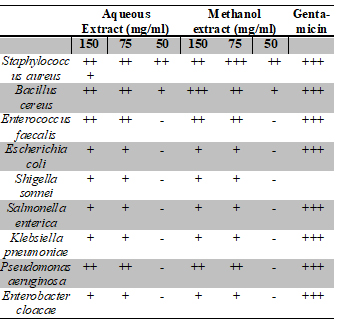 Table 2 shows the fungal inhibitory potential of M. monandra extracts. The results indicate an antifungal activity from 75 mg/ml with diameter of inhibition ranged between 6 mm to15 mm for the aqueous extract and from 6 mm to >16 mm for the methanol extract. 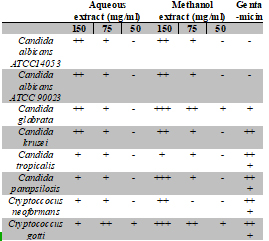 The present study aimed at evaluating the potential antibacterial and antifungal effects of M. monandra extracts against several bacterial and fungal strains. The results revealed a higher sensitivity of Gram-positive bacteria to the extracts compared to Gram-negative bacteria. Several studies report that medicinal plants are more active on Gram-positive bacteria such as the one tested [26]. Gram-positive bacteria are the most common causes of clinical infections and according to Woodford and Livermore [27], infections caused by Gram-positive bacteria constitute major public health burden in terms of mortality, morbidity as well as in terms of increased patient management expenses. In addition, several plants from the same genus such as Macaranga bancana, M. gigantea, M. pruinosa, M. tanarius and M. triloba were reported to exert strong antibacterial activity [28] what sustains the finding in the present study as many plants belonging to the same taxa (species, genus, families) share group of characteristic compounds. In another hand, aqueous extract and methanol extract did not show a significant difference in the antibacterial activity as the extracts displayed the same range of diameter of inhibition for all the bacteria tested. Moreover, the yield of the extracts was not significantly different suggesting that similar phytochemicals might have been extracted with the two solvents. M. monandra which showed promising potential against Gram-positive bacteria could be a source of antibacterial molecules that’s worth to be explored.

Worldwide fungal infections are responsible for hundreds of thousands of deaths each year among individuals with AIDS and HIV [29]. These fungi are causes for numerous infections such as Pneumocystis pneumonia, meningitis, histoplasmosis, pulmonary aspergillosis, oropharyngeal and oesophageal candidiasis. Some commensal fungi become harmful and cause infections in immuno-compromised individuals. However, many studies have validated medicinal plants in fighting fungi such as Candida spp., Aspergillus spp. and Cryptococcus spp by performing assays including agar well diffusion [30-32]. In our study, M. monandra extracts were able to exert a weak antifungal activity from 75 mg/ml against all the fungal strains tested including hospital isolates. These findings are in accordance with the study by Salah et al. [24] who pointed at kolavenic acid and 2-oxokolavenic acid as responsible for the fungal growth inhibition of M. macaranga. The weak antimicrobial response of the extracts could be due to the ability of some plant compounds to diffuse in agar. Some non-polar molecules can’t diffuse properly in agar that can explain the weak activity displayed by the plant extracts [33]. Many factors such as solubility or polarity of the compound may have played an important role in the activity displayed, hence, liquid methods such as broth dilution methods may provide a more realistic idea of the antimicrobial activity of the studied plant especially if a previous screening is done to highlight the most sensitive microorganisms.

This study is a preliminary work with the aim of screening M. monandra bark aqueous and methanol extracts for potential antibacterial and antifungal properties. Few information is available on the literature regarding the antimicrobial activity of this plant, making a necessity to gather data on its potential antimicrobial activity. The yield of the aqueous and methanol extracts was approximately the same. The results in this study indicate encouraging antimicrobial properties particularly against gram-positive bacteria such as S. aureus, B. cereus and E. faecalis. Nevertheless, M. monandra also displayed interesting inhibitory activity against Pseudomonas aeruginosa and some strains of Candida (C. albicans, C. glabatra, C. krusei). In addition, the diameter of inhibition induced by the methanol and aqueous extracts did not show a significative difference when compared. In Gabon, M. monandra is used to alleviates HIV symptoms and other ailments including infectious diseases caused by bacteria and fungi. We believe that infectious diseases and antibiotic resistance represent a challenge which can be overtaken by the discovery of new antibiotic molecules derived from medicinal plant compounds. This study has demonstrated that the studied plant has a good antimicrobial potential which can explain it utilization in traditional medicine against the above-mentioned pathologies. Yet,  further investigation using other methods such as minimum inhibitory concentration and minimum bactericidal concentration determination should be led to validate the activity displayed in this study. In addition, a bio-guided fractionation  should be undertaken to identify compounds which can be responsible for the potential antimicrobial activity displayed in this study by M. monandra extracts.

The antimicrobial screening was performed according to Hassan and Ullah [25] with some modifications. Briefly, bacterial and fungal colonies were collected from a 24 h mother culture and suspended in broth solution (nutrient broth for bacteria or Sabouraud broth for fungi). A suspension corresponding to 0.5 McFarland standard was prepared. A sterile cotton swab impregnated with the inoculum was used to evenly streak the entire surface of the agar (Sabouraud dextrose agar for fungi and Mueller Hinton agar for bacteria). Then, 6 mm wells were punched onto the plate. Afterwards, 50 µL of different plant extract concentrations (50 mg/mL, 75 mg/mL, 150 mg/mL) was transferred to the corresponding well, followed by incubation at 37°C for 24 h for the bacteria and 48 h for the fungi. Gentamicin (10 mg/mL) was the positive control. The test was run in triplicate.

Authors’ contribution: All authors equally contributed in designing, execution, data collection, analysis of the results, drafting, editing and finalizing the manuscript work. All authors have read and approved the final manuscript.