Imidazole was discovered in 1840s and after its discovery a flood of research and development on imidazole based compounds is carrying out due to its large number of applications such as pharmaceutical drugs, agrochemicals, ligands, and synthetic acceptors, catalysts and so on. [1-4]. Imidazole based compounds have special place in the field of medicinal drugs [5]. For the treatment of various ailments, a variety of imidazole derivatives 1) 1H-imiidazole, 2) (z)-N-(cyclohexa-2,4-dienyl)-N-methylformamidine, 3) 4,5-dihydro-1H-imidazole, 4) 2,5-dihydro-1H-imidazole, 5) 2,3-dihydro-1H-imidazole and 6) Imidazolidine (figure 1) are playing vital role and researchers are exploiting novel imidazole derivatives with medicinal applications [6-7]. 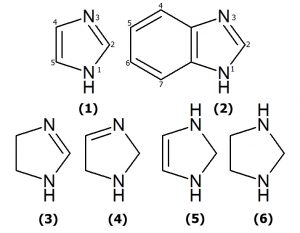 Figure.1: 2D structural representation of Imidazole and its derivatives.

Imidazole ring has special structural features which enable it to interact with many enzymes and receptors in biotic entities through ion-dipole, hydrogen bonds, π–π stacking, coordination, cation–π, van der Waals forces and so on [8-10]. The various biological activities of imidazole derivatives are attributed to presence of imidazole ring in many vital bio-logical molecules such as deoxy-ribonucleic acid (DNA), histamine, vitamin B12 and hemoglobin [11-13]. It is widely used to design and synthesize biologically active molecules as it is considered as iso-stere of triazole ,oxazole, pyra-zole, thiazole, tetrazole, amides and so on [14-16]. The review of literature unveiled that imidazole based compounds have potential applications such as anticancer, anti-hypertensive, anti-histaminic, anti-neurophatic, antihemolytic, cytotoxic, antimycobacterial, antioxidant, and antimicrobial and so on [17-20]. A large number of imidazole based compounds with medicinal applications have been reported like dacarbazine, zoledronic acid and azathioprine as anticancer, oxiconazole and miconazole as antifungal, secnidazole and benznidazole as antiparasitic, cimetidine and dexmedetomidine as antihistaminic, losartan and Olmesartan as anti-hypertensive, dexmedetomidine and fipamezole as antineuropathic (figure 2) [10, 21-23]. 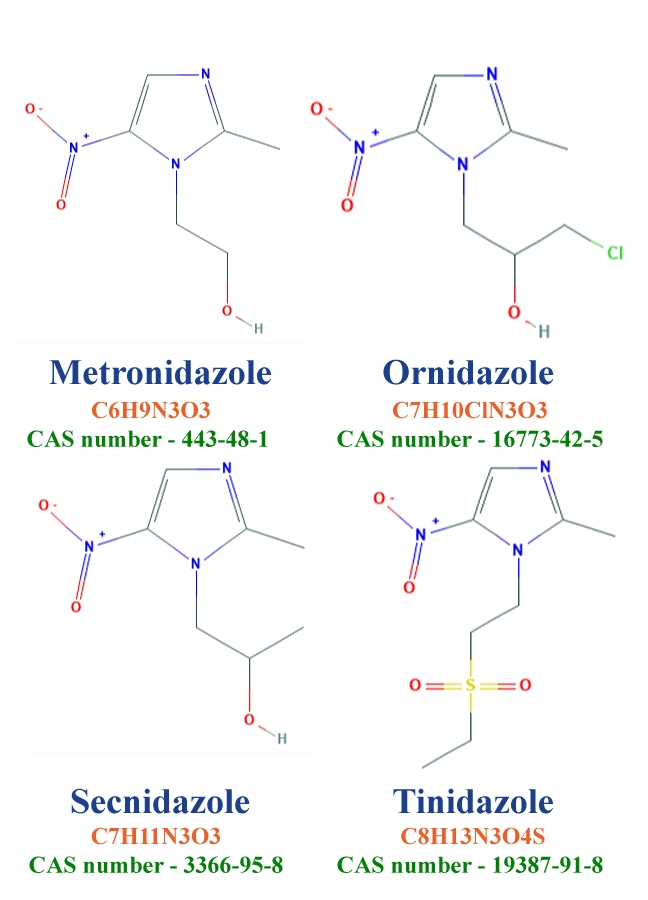 There are different approaches for imidazole synthesis based compounds but among all routes, multicomponents one pot synthesis is convenient and widely used method in organic reactions and pharmaceutical chemistry [26]. This method is highly efficient, economical and gives high yield of desired products [27]. Multicomponent synthesis is also widely used method for the synthesis of imidazole based compounds especially for tetrasubsituted ones. Tetrasubsituted imidazole is a class of imidazole with high medicinal chemistry and biochemical process [28] and possess potential applications as analgesic, anti- inflammatory [29], fungicidal, antibacterial and antitumor activities [30]. Therefore, synthesis of tetrasubsituted imidazole has become of remarkable importance for recent years globally. In current study, we report the synthesize of three tetrasubsituted imidazole compounds (K1, K2 and K3) via cyclocondensation of 1,2-diketone ( benzyl ) , aldehydes , primary amines and ammonium acetate using glacial acetic acid as a catalyst. The newly synthesized compounds; 5-methyl-2-(2-methyl-4,5-diphenyl-1H-imidazol-1-yl)phenol (K1), 2-[2-(furan-2-yl)-4,5-diphenyl-1H-imidazol-1-yl]-5- methylphenol (K2) and 5-methyl-2-(2, 4, 5-triphenyl-1H-imidazole-1-yl) phenol (K3) (figure 4) were initially analyzed by physical methods such as solubility, melting point, conductivity and thin layer chromatography (TLC) and then with spectroscopic techniques like UV-Visible and FT-IR. The synthesis and computer study of compounds entitled as K1, K2 and K3 never reported previously according to our best of knowledge. 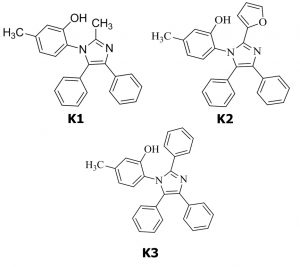 The newly prepared tetrasubsituted imidazole derivatives (K1, K2 and K3) inert against climate and humidity at room temperature.. They exist in crystalline form and have color differentiates. Color, physical appearance and melting points of synthesized compounds are shown in table 1. 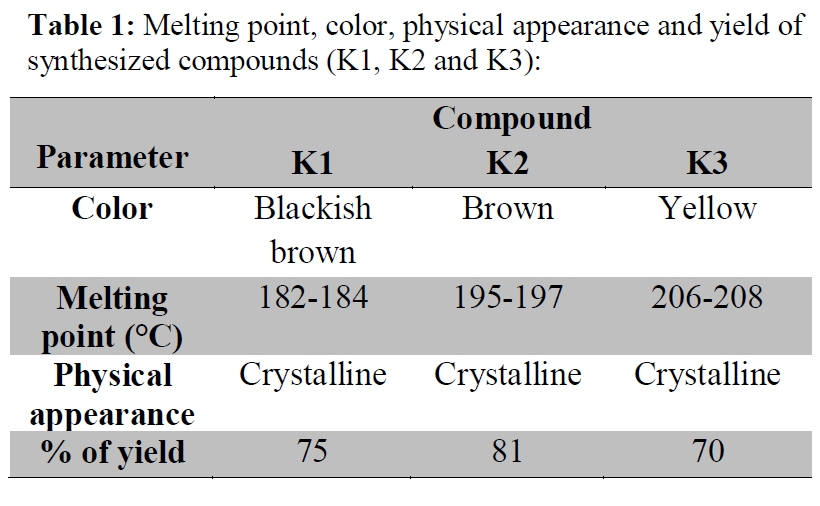 The λmax of all synthesized compounds was determined experimentally in the solvent phase. The experimentally determined values are tabulated in table 3. It was observed that compound K3 has highest λmax while K1 possess lowest one.

Selected IR values of K1 are given in Table 4. The IR spectra of K1 exhibited that a new peak is revealed at 1650 cm-1 which may be due to presence of stretching frequency of C=N . This indicates that the probable imino bond (C=N) might be shaped due to cyclocondensation of benzil, primary amine, aldehyde and ammonium acetate. The C-N peak occurred at 1440 cm-1, which also suggests the development of the required compound. Peak appeared at 3345 cm-1 due to O-H stretching frequency. New peaks observed at 3050 cm-1 and 2912 cm-1 due to sp2(C-H) and sp3(C-H) stretching frequencies. Peak at 1680 cm-1 was vanished that directs the absence of benzil. However, the remaining peaks of different groups did not undergo significant change.

The few selected IR values of K2 are given in Table 4. Data revealed that the bands due to the azomethine (-C=N-) linkage observe at 1658 cm-1. The peak of C-N occurred in the range of 1419 cm-1. The peak due to formation of C=N bond showed that our required product might be formed by condensation of benzil with p-cresolamine and furfural. Peak at 1575 cm-1 might be due to (C=C) of aromatic imidazole ring. Peak due to sp2 (C-H) also appeared at (3058 cm-1). The band due to OH stretching frequency appeared at 3315 cm-1. Peak due to C-O stretching frequency also observed at 1325 cm-1. However, the remaining peaks of different groups did not change any more.

Some selected IR values of K3 are given in Table 4. Peak at 1656 cm-1 indicates the formation of C=N linkage present in imidazole ring. This shows that imino bond which is required to establish might be formed by condensation of benzil with p-cresolamine and benzaldehyde. Peak at 1522 cm-1 shows the presence of C=C which may be of aromatic imidazole ring. Peak of sp2(C-H) appeared at 3065cm-1. Another new peak also appeared at 1449 cm-1 which may be due to C-N stretching frequency. This also indicates the formation of required product. Peaks at 3305 cm-1 due to OH stretching frequency and at 2908 cm-1 due to sp3(C-H) are the indications of desired product development. Peak at 1680 cm-1 due to benzil carbonyl was missing that shows the complete condensation reaction of benzil with other reagents. All other peaks were not changed significantly. 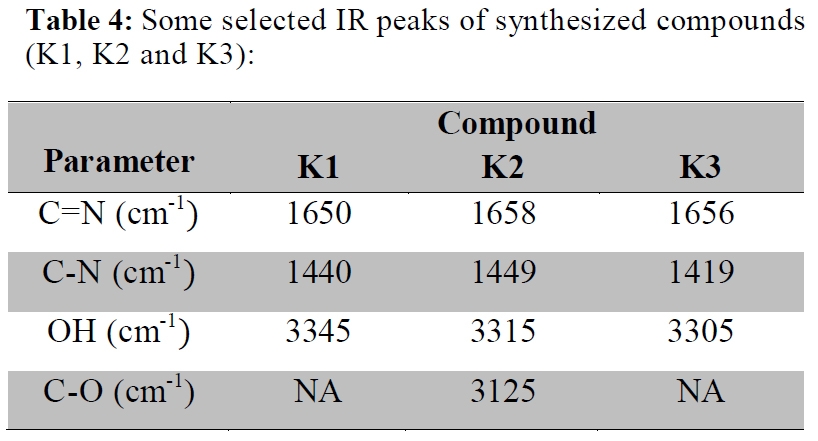 The biological activity of all three synthesized compounds (K1, K2, K3) was checked against one Gram negative (Escherichia coli) and two Gram positive (Bacillus subtilis, Staphylococcus aureus) following published literature [31]. The results obtained by compounds were compared with a standard drug (Ciprofloxacin). Synthesized compounds had major action toward bacterial species. Compound K2 has been found to have the greatest efficacy against certain strains of bacteria. On the other hand, lowest activity was shown by compound K1. The compounds K2 and K3 presented promising results (>20mm) against all bacterial strains. The compound K2 demonstrated maximum activity among all three compounds (23mm) against Bacillus subtilis (Table 5). 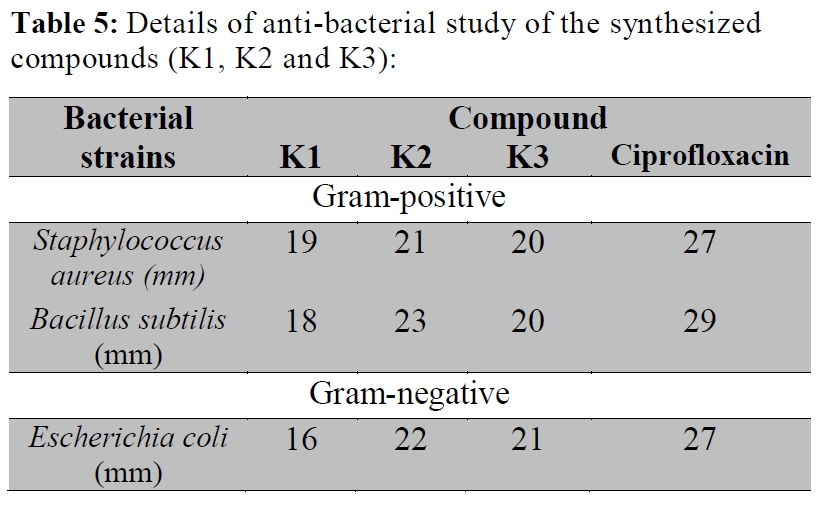 All chemicals used in this work were of laboratory quality (analytical) obtained from Sigma Aldrich by chemical suppliers. The purchased chemicals were used in the synthesis without any further refinement and action. The solvents used in the research were also purchased from chemicals suppliers and before use they were distilled. The reactions were monitored using thin layer chromatography proceedings and chromatographic plates were irradiated in U.V and then assessed in iodine vapors. In order to check the percentage composition of newly synthesized compounds, elemental analysis by EL III CHNOS elemental analyzer (Elementar, Hanau, Germany) was accomplished.

For the purpose of both heating and stirring the reaction materials, magnetic stirrer hot plate with stirring range 50 to 1200rpm and heating range (60-200 °C) was applied. To weigh the materials, AX200, Shimadzu, Japan modal was used. The melting point of newly synthesized compounds was determined by using melting point apparatus (Gallen Kamp). Agilent technology (Cary-620) FTRIR spectrophotometer was used to check the presence of desired functional groups of synthesized compounds by taking IR Spectra. SHIMADZU UV 240 spectrophotometer was used to obtain the spectrum of U.V/Visible technique. To measure the conductivity of synthesized compounds, SDT-600 conductivity meter was used. Elemental analysis was performed by using EL III CHNOS elemental analyzer (Elementar, Hanau, Germany) to check the percentage composition of elements in synthesized compounds.

General method for the synthesis of compounds; K1, K2 and K3

Tetrasubsituted imidazole derivatives (K1, K2 and K3) were synthesized according to reported protocol with small variations.